“Come and hear latest recordings”. Gillibrands used a generic sleeve and made a rubber stamp to overprint their shop details. The market hall was built in 1851 and demolished in 1959. (The replacement market hall is being trashed by the city council after 50 years, half of which have been in total neglect. That’s progress.)

“Your order is always safe with them” suggested the sleeve. The shop was run by Walter Goddard (mentioned as a certified piano expert) and sold “Pianos, Radio, Radio-grams, Gramophones and Records”. A sleeve from around 1920 pointed out that they had been established nearly 50 years, giving a likely opening date of 1870. Both shops must have been quite modest. No. 11 is still standing, an estate agents. 289 is a nail bar – of sorts.
Goddard also published Walter Goddard’s Collection of the Old Favourite Christmas Tunes in 1928 from his shop (reprinted in 1946) [ http://www.villagecarols.org.uk/ ]
(There was a Goddard’s Music Store in Rotherham from circa 1960 to at least 1973, I do not know if the owners were related.)

Based at 52 Church Street, this shop took over from Dewhurst’s (see separate entry).

Gramophone Gallery (The), High Court, High Street
Opposite Walsh’s department store. Listed in the Sheffield & District Trades Directory (1927-28), no other information. No sleeve
Virgin moved here in the 1980s for a short time.

Gramophone Records / Gramophone Players. Open All Day Sunday (according to one sleeve)

Graves. J.G.. Gell Street
Graves was one of Sheffield’s early retail pioneers, and it is known they had a record department, listed in the Sheffield & District Trades Directory 1927-28 at least to 1949/50. No sleeve discovered

Their shop sleeve advertises Broadcast Records which stopped around 1932, suggesting the shop was open in the Twenties. The property is still there (below), a narrow terrace house, so the front room was probably converted  into a walk-in shop room.

As well as records Mrs G. also offered cabinets made to order, and gramophone repairs, possibly farming this work out. I love the idea of a record shop called Mrs. Gunthorpe’s!  Ann and her husband Fred Gunthorpe lived in Bright Street in 1910 when Ann was 28. He opened a hairdressers in nearby Dunlop Street (there in 1919 – Whites Directory). The record shop is not listed that year so we assume she branched out sometime in the early 1920s. The area has been redeveloped. 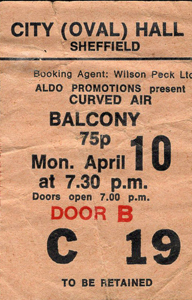