From 1974, Renia were described as a “solid, energetic and rather straightforward hard rock band with strong vocals, fine melodies and some progressive influences (almost omnipresent Hammond organ and the mighty mellotron on amazing & truly beautiful ‘Shelter’ track) similar to Stray, Strider and early Nutz.”

Unfortunately, the album went completely unnoticed and the band broke up. Here’s a fairly upmarket apology for missing a gig at the “Mucky Duck”, found on ebay 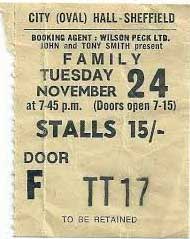