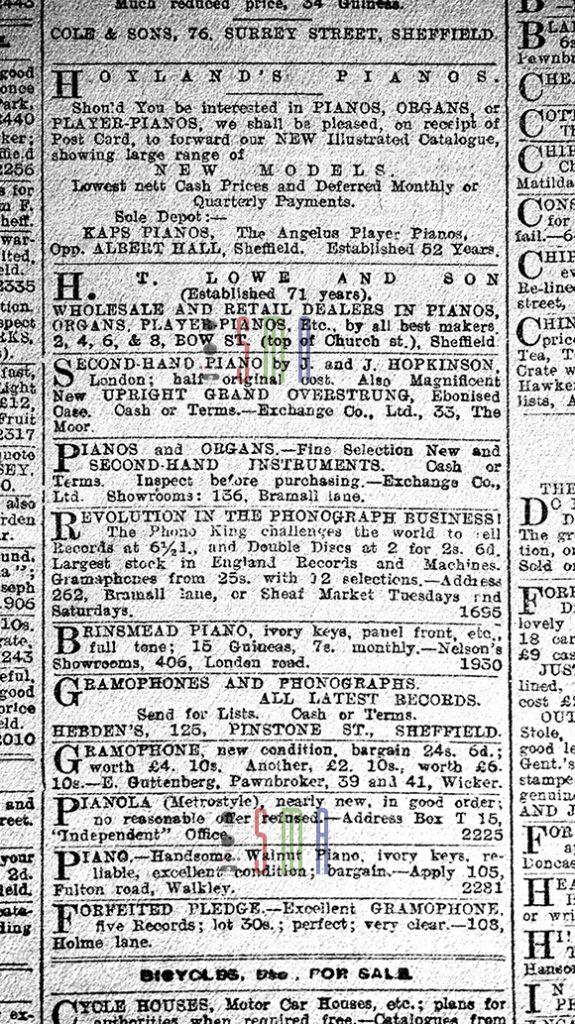 Going through some old local newspapers recently SMA found a few classified adverts which give us a small glimpse of Sheffield’s second hand music scene back in 1911, one of which is show above. Pianos not surprisingly dominate the adverts, both new and reconditioned, but there are some names we know from later selling 78s.
HOYLANDS certainly sold records around this time, although here they are offering an illustrated catalogue of keyboards in return for a postcard with your details. They had been in business since 1859.

LOWE’S are here advertising pianos and organs, though I think they later sold records, and it is interesting to see that in 1911 they had already been in business since 1840.
There are some second-hand pianos from a firm called THE EXCHANGE CO. on The Moor and Bramall Lane, which seems to be something like the shops today which sell new and second hand electrical goods.
The name of NELSONS pops up and they were also a record retailer, again advertising pianos here.

There are a couple of adverts for records, the biggest is from THE PHONO KING (run by H. Smith) who had a shop on Bramhall Lane and also stalls at the Sheaf Market a couple of days a week. Here they are trying to outdo competitors by offering records at 6.5d, or double discs (maybe two sides versus single sided) at two for 2s 6d. The boast of the largest stock in England is quite a claim, although with travel fairly limited for most people it would be hard to disprove. Also on offer are gramaphones (sic) at 25s with a selections of discs. 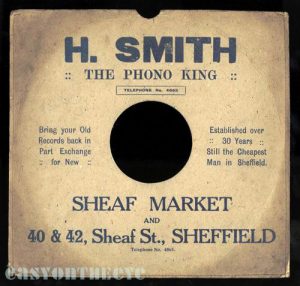 HEBDENS are also pushing records, from a shop on Pinstone Street or by mail if you write in for lists. “Cash or terms” are offered, record players were not cheap for the average worker. I have not see a sleeve for this shop to date but they also ran their own display adverts from time to time, the one below dates from the time of the First World War, hence the wording of the Toffee advert. 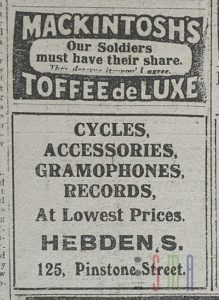 A couple of people have clearly pawned their players and GUTTENBERGS on The Wicker (there’s a good old Yorkshire name!) are offering these at around a third retail price if the advert is to be believed.
There is another pawn shop at 108 Holme Lane offering a gramophone (the spelling still varied) along with five records for 30 shillings, as a “forfeited pledge”. Life clearly wasn’t easy.  As we write, a second hand record shop is opening on Holme Lane, the first for about 100 years. 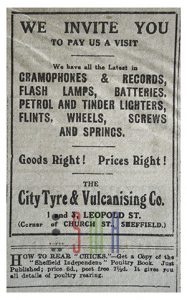 The stand alone display advert above is from the CITY TYRE & VULCANISING CO. Not quite as catchy as HMV, but I have one of their 78 record sleeves, and it seems they sold discs alongside gramophones and loads of sundries for cycles (vulcanising was a process to improve the quality of rubber cycle tyres). 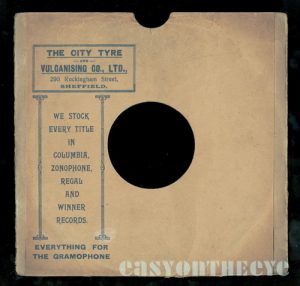 Most of these stores are listed on our A-Z of Sheffield Record Shops on this site.  Simon.