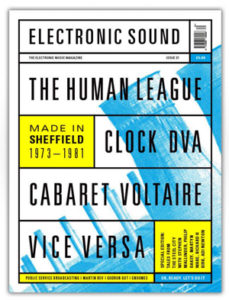 The city of Sheffield stars in this issue. Through the eyes of The Human League’s Philip Oakey and Martyn Ware, Clock DVA’s Adi Newton, Cabaret Voltaire’s Richard H Kirk and Stephen Singleton and Mark White from Vice Versa/ABC, our Made In Sheffield feature tells the story of how, between 1973 and 1981, the Steel City became one of the world’s electronic music capitals.

Former-Cab/Wrangler’s Stephen Mallinder provides his unique take on the city’s formative years, while I Monster’s Dean Honer explains how the city isn’t resting on its laurels and supports a vibrant electronic community to this day.