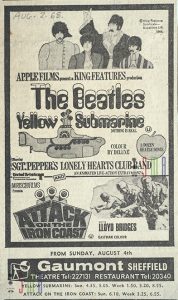 What a nice piece of musical ephemera which I clipped out of an old newspaper at some time.  Yellow Submarine was released just a couple of weeks before in London, and then opened here in Sheffield on August 4th 1968 (52 years ago today).  It was playing at The Gaumont, which was Sheffield’s premier city centre cinema. Opened in 1927 it could seat 2,300 people – an astonishing figure today.  Like many cinemas, it also doubled as a music venue in the 1950s and 60s, with bands including Cliff Richard, Eddie Cochran, Bobby Darin, Victor Borg, Nina & Frederick, The Rolling Stones, The Beatles and the Count Basie Orchestra appearing here.

The Yellow Submarine was actually one of the very last films to be shown here before it was altered to make two smaller screens inside later in 1968. I did see the movie on the big screen, but cannot recall if it was here or a couple of years later at our local Abbeydale Picture House. In those days popular films would tour for a couple of years or more to get the maximum viewing.

In a move typical of the city they allowed this fabulous building to be demolished and replaced with was remains to this day the ugliest mirror faced piece of rubbish ever built in the city (and I like modern architecture!). Simon R.