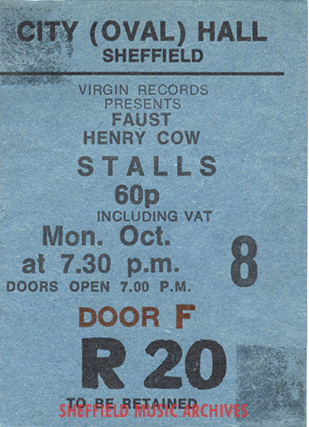 I must confess for a teenager this wasn’t the easiest of music to get to grips with. But it was a cheap ticket and heavily promoted by the Virgin Records label. We were actually on the side of the stage for most of Faust’s set, totally bewildered by it all.

They had TVs and pin-ball machines, and it all seemed to lack any sort of cohesion. After a while the band seemed to realise they were getting nowhere, had the house lights brought up and left the stage.

People got restless and angry when they realised that was it. We wandered onto the stage and started messing with the pin-ball tables, only be told to clear off. “You should have done that while they were playing…” I assume many of the soon to emerge Sheffield band scene were also in the audience.