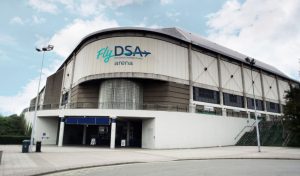 FlyDSA Arena (originally known as Sheffield Arena) is an arena located in Sheffield, England. It is situated near Rotherham, Sheffield City Centre, Meadowhall and the Centertainment. The arena opened as Sheffield Arena in May 1991 and was renamed Hallam FM Arena in 2002, but returned to its original name from 1 November 2007. On 9 August 2010, Sheffield Arena was officially renamed Motorpoint Arena Sheffield, after the Derby based car sales company invested £1 million to rename the venue.

In July 2013, the arena underwent a major renovation and now has a new roof, doors, seats, lighting, catering and toilet facilities. In August 2015 the arena was once again rebranded as Sheffield Arena, however in September 2017 nearby Doncaster Sheffield Airport began sponsoring the arena giving it a rebrand, FlyDSA Arena.

Constructed at a cost of £34 million, it was opened by Queen Elizabeth II on 30 May 1991. The first concert took place that evening, Paul Simon playing as part of his “Born at the Right Time” tour. The arena then took on the role of Gymnastics Hall for the 1991 World Student Games which were held in the city and which prompted the investment in, and development of, both the arena and nearby Don Valley Stadium.

The arena was the location for the Labour Party’s 1992 Sheffield Rally. Attended by over 10,000 party members and the entire shadow cabinet. Held just before that year’s general election, which Labour was widely expected to win, the event is often seen as a factor in the party’s defeat. While the event was seen as a success to those within the hall, many commentators, and Labour politicians, viewing it as triumphalist in nature. However, it has also been asserted that the event had negligible impact on the outcome, with a fall in the party’s support having already occurred. 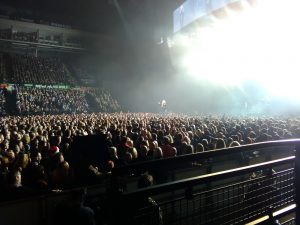 The arena also hosts annual events including Disney on Ice which is held every year over November / December. TV shows such as The X Factor, Britain’s Got Talent, Strictly Come Dancing and Dancing on Ice visit the arena every year as part of their tours.

The arena is a regular venue for some of the worlds best known Comedians such as Russell Brand, Lee Evans, Jack Whitehall, Eddie Izzard and Peter Kay who in 2011 played the arena for 5 nights running with all shows selling out within hours of going on sale.

The arena has hosted major special high-profile events, including The International Indian Film Academy Awards, which took place on Saturday, 9 June 2007 and was broadcast live around the world. This included a season hosted by the city of Sheffield and nearby Leeds. Also, in 2009, the arena hosted the annual BBC 1Xtra concert and the 2009 BBC Sports Personality of the Year. The Sheffield Arena is used regular for sporting events and is the home to the city’s Elite Ice Hockey League team, the Sheffield Steelers. 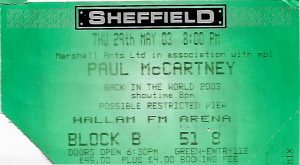 The arena has hosted major boxing events such as when Joe Calzaghe first won his WBO world title here on 11 October 1997 against former world champion Chris Eubank. On the same bill Sheffield born Naseem Hamed defended his WBO title against Jose Badillo. On 26 November 2005 Ricky Hatton extended his unbeaten record to 40–0, defending his IBF and Ring Magazine Junior Welterweight world titles and winning the WBA belt by 9th-round knockout against Carlos Maussa. Sheffield fighter Clinton Woods also defended his IBF light-heavyweight title against Mexican Julio César González on two occasions, winning on points both times. Kell Brook has had many fights here, his most notable being a fourth-round knockout victory of Vyacheslav Senchenko. The Great Britain men’s national basketball team played a test match against Portugal in that arena in preparation for the 2012 Olympics.

Sheffield Steelers
The arena’s resident sport team is the Sheffield Steelers ice hockey team who play in the Elite Ice Hockey League. The Steelers have recorded crowds of up to 10,000 in the building with extra seating being installed at the venue.