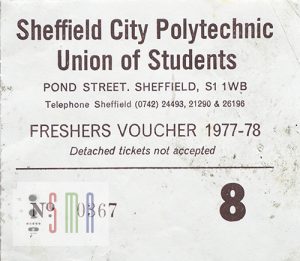 From our archives; not an actual concert ticket but we think this was a book of vouchers given out by the Polytechnic to new students, which could be redeemed against admission to gigs, and other events. Maybe even 10% off Never Mind The Bollocks at Virgin Records!  Sheffield Polytechnic? Yep, it was retitled Sheffield Hallam University in 1992.  They had a few music areas, one inside the main building for smaller shows then the newer Union building near the station, called the Phoenix Building when it opened in 1978, later renamed the Nelson Mandela Building in 1982, for bigger concerts. In a brilliant move to squander earth’s resources, they then pulled the building down and left the site empty. Anyway if the voucher rings a bell let us know what you used yours for.  Simon R.