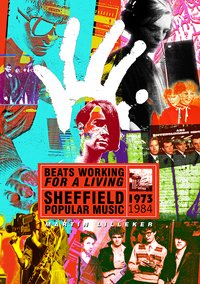 Martin followed up his first title with a book covering perhaps the most important decade in the city’s musical story. Same format as the first volume but the bands will probably be a lot more familiar to people outside the city than the first. Together these two books give as good an account of popular music in the city as you’re likely to get, and Sheffield is lucky to  have had someone like Martin willing to put them together.
Like book one the early print run had a CD of rare demos and goodies.