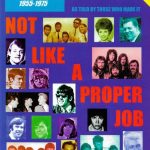 These are the two books which ought to be on the top of anyone’s shopping list. Not Like A Proper Job was put together by former Sheffield Telegraph music correspondent Martin Lilleker and Sheffield musician and local historian John Firminger. The following review is from the web site Sheffield Vision.

“Martin told me the book was essential from a factor of time, as he explained that although Sheffield had suffered very few rock casualties, time was moving on. During the five year period it took to research the book, at least 10 musicians had died. The book is a rollercoaster ride of styles that includes jazz, skiffle, beat music, soul, R’n’B and psychedelic.  In the beginning there was… the Big Band sound? “Not for very long” as Martin was quick to correct me. After the war the Big Band sound had been swept aside by the influx and impact of Jazz on the city. To the outsider, sixties Sheffield was represented by Joe Cocker, who is still as busy as ever. Martin told me that Joe Cocker still has his roots in Sheffield and returns frequently to his hometown. Martin also drew parallels with Jarvis (his name sake) in that they both had kept banging away at the door of success for years beyond natural endurance, before it opened for each of them. Obviously in the 60’s there was more happening than Joe Cocker. The life and blood of the city were the clubs, as it still is today. Terry Thornton’s Club 60 had acquired a reputation for excellence that had even surpassed Liverpool’s The Cavern. Dave Berry described The Mojo as “wild and fashionable”, and the Esquire as “sophisticated and jazzy”, and there was the Black Cat, Peter Stringfellow’s thriving club.

I had wondered whether there had been much crossover with the Working Men’s Clubs, but Martin assured me that times hadn’t changed. Back in the midst of time the WMC’s were still “a graveyard for many fine musicians, who were more content on earning an easy quid performing cover versions”. The book climaxes in the 70’s, the time when Sheffield fell into a major slump as club after club closed and real bands began to lose out to Disco.

During the research, Martin told me that he was glad to have had the opportunity to interview Chris Spedding, as he’d wanted to meet him for sometime. Also in a moment of possible insanity, he had persuaded McLoskey’s Apocalypse to reform for one gig. Martin had seen them in his own early days, and had obviously been marked by the event.”

The A4 book was printed locally and is mostly text based but with b/w photos spread throughout. The initial print run came with a free CD of rarities from the period and is worth hunting down. Later editions lacked this. 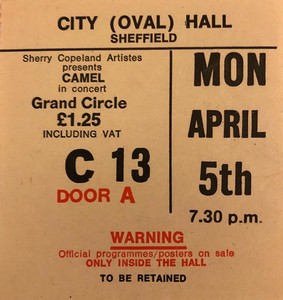