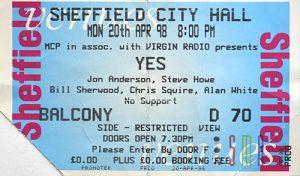 Seeing Yes in 1998 was a little strange. Generally I don’t bother going to see bands again who I saw in their prime back in the Seventies (or bands who suddenly discover that they were always huge friends after all and so decide to reform!). And having seen Yes twice back in the day (as I’m told youngsters refer to older times), once on the astonishing Topographic Oceans tour (at the City Hall), then just after Patrick Moraz joined (over in Manchester – both great shows) the news that they were doing a British tour in 1998 didn’t set the blood racing. However at the time I was involved with a reissue record label called RPM and we had licensed some material from Yes guitarist Steve Howe and he was able to put me on the guest list (not something I have ever made much of a habit of I hasten to add), so fearing the worst I gave my brother the other guest ticket and off we went.
And it was excellent. It really was as good as they’d been back in the ’70s and I was both surprised and impressed. Yes are of course one of those bands you either get or you don’t, but obviously for this show the hall was sold out to die-hards (2100 or so). The band played a great selection of material from their glory days (about half) and it was clear they had worked very hard to get everything just right. 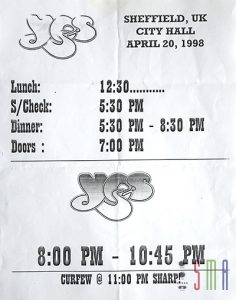 The line-up was mostly familiar to us, with four members of the 70s era:
Jon Anderson (Vocals) Steve Howe (Guitars) Billy Sherwood (Guitars) Chris Squire (Bass) Alan White (Drums) Igor Khoroshev (Keyboards)
There was, as the ticket says, no support, so they had time to really pack in a lot of the longer material before the dreaded curfew deadline. It’s a shame more bands don’t do this. I could not resist taking the check sheet off the dressing room door, these are not something which often survive as they get thrown away. Basically they give everyone involved the timeline for the day, rock has for some time been run along these tight deadlines, not like back in the ’70s when it ended only when it ended.
There is a site out there with some fan pics from the gig:
http://forgotten-yesterdays.com/dates.asp?ftype=1&qbandid=1&qdec=1990&qdateid=1192