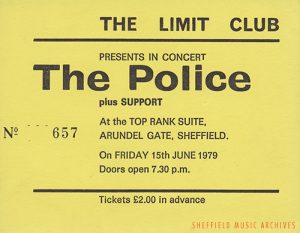 The Top Rank Sheffield Suite has had several incarnations; nightclub, concert venue and even a gospel church for a time!  But starting around 1977 it began to have a great spell as a rock venue just as punk and new wave began to take off.  There was a large open floor space, but also a balcony around three sides, so if you didn’t fancy getting bounced around too much you could skulk upstairs and get a great view of the stage (which was quite high).

Now in 1979 The Police were on the verge of smashing it big time with their album debut in the UK top ten, and top thirty in America, and three hit singles off the album. I was quite keen to see what they were like live, but also had found a couple of import 45s by the support band The Cramps (Human Fly and their version of Surfin’ Bird) and really fancied finding out what they were like live. So it was worth £2 for a ticket.

Most of the audience were understandably there for the headliners so I was able to get quite near to the stage ahead of The Cramps coming on, and what a scary bunch they looked. I swear the crowd took a couple of steps back when guitarist Bryan Gregory growled at them and went into the set.  This was their first tour here and they were determined to really blast through their rockabilly punk grunge set like they meant it.  I was able to get some photographs and then could rest up before The Police hit the stage.

Now they were good but it just felt both a little lazy after the support group, and also a but condescending too, as if they thought they were better than this.  Frustratingly their initial promise musically never really developed as they got so big so quickly they never had to try and harder.

I do remember some great silk screened posters being sold at the merch stall (one of which I still have somewhere) but always feel it would have been better to see them a year or two before this tour.  I did go along and see one of the stadium shows later, Leeds Queens Hall, mainly as my sister wanted to go!

I was a real Cramps fan after this and we saw several shows over the next few years in Leicester, Birmingham and even trekked down to The Astoria on what sadly proved to be their last UK show. But that first one at The Top Rank remains strong in the memory.

Looking around the forums one or two fans seem to think there was a third band opening for the evening, and they may be right but if so I cannot remember who they were. Any way below is one of my shots of ‘Poison’ Ivy Rorschach from the show. Simon