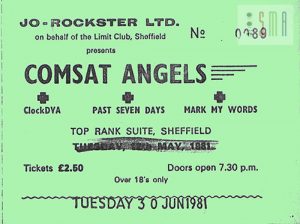 Put back from the previous month, this was a great evening for local bands, and The Comsat Angels were riding a wave of critical acclaim and just weeks away from releasing their stunning second album Sleep No More. So they were a no-brainer to headline this home town show.  They remain my favourite band from the city to this day.  But on the night I was there to also catch The Past Seven Days, another brilliant local group who only ever issued one single (on 4AD!). I’d been helping them out with some design work (including the single) and doing promo photographs etc. so went along to take some live shots of them as well. Clock DVA are perhaps better known today, but I never really clicked with their material. Mark My Words was often referred to as Sheffield’s own John Cooper Clarke, those are massive shoes to try and fill!  I cannot remember masses from the show, though I do still have my photos.  I actually saw The Past Seven Days four times alone that year, it all starts to blur!  This show was actually staged at The Top Rank by The Limit Club, as they were far too small to accommodate the amount of interest in the show.  A lot of rosy tinted words have been put out about the Limit but to me it was a real tip, so any chance to see a band elsewhere was welcome.

Below is the advert for the show from the local newspaper, The Star.  They include the band B Movie instead of Clock DVA.  Now I do recall seeing B Movie, so this might have been the night. Let us know if you can confirm. 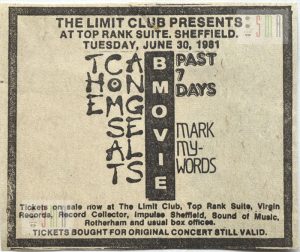