Revolution Records probably opened in the early Seventies, but became arguably Sheffield’s most important indie record shop for a time in the Punk era (Record Collector is more famous but was not in the centre.)  They specialised in singles, and also sold imported Punk and New Wave records.  There was a hand written listing on the wall showing what was coming out and release dates so you could pre-order, and the shop staff clearly enjoyed their work.  I think the owner had worked for one of the major labels before setting up the shop, so knew his stuff. Revolution was three floors up on a walkway on what was known as The Castle Market Gallery, part of the large post War market redevelopment of the early Sixties, so you had to know it was there and make a special trip to visit.  It was quite a modest size lock-up shop, with the walls about the racks covered with promotional posters.  I remember them letting me have a wonderful screen-printed Sire Records display for the second Talking Heads album, on a silver plastic sheet (which I have never been able to part with!).  I also bought an import colour vinyl Stranglers EP there, and probably more stuff now forgotten. It was needless to say a busy hang out point on a Saturday for punk fans.  A measure of how important it was is the fact that The Jam came here for an in-store appearance rather than any of the bigger shops, and were famously photographed outside for the local press.

I’m not sure what happened to the business. The original acrylic shop sign was revealed recently (it needs saving!) and can still just be seen from the street, though the walkway is now locked off and the shops all closed following the wanton and expensive destruction of the fine Market building itself on the orders of thick idiots at the Council.

Mentioned on a forum, open in the 1970s and later became a video shop. Address not known.

Savage’s shop on Main Road must have been close to the Music Box (see separate entry). This side of the street has been redeveloped since (the Lyric Cinema has also gone). They also had a branch at 661 Staniforth Road with the same phone number (see second sleeve below), I do not know which came first.

Scott. E
105 Infirmary Road
Another Electrical and mechanical engineer, also selling radios and cycles, who must have sold records for a while in the early 1920s. This area of Infirmary Road was demolished in the 1950s to make way for the Kelvin Flats.
See also Hobson & Allen, and Pownalls close by, who also sold records.

Electrical Engineers. This was a standard white goods store serving the local suburb of Broomhill; fridges, radios, kettles, etc. They also sold a selection of albums and singles for a time. I bought some of my first singles there in 1970 as it was close to my school. The shop lasted into the 1980s but had stopped doing records by then. Research suggest the business began in 1946 in the original Victorian parade here; an early sixties photo shows Sine Electrical with a separate Record shop next door. Some time in the late sixties this block was demolished and replaced by the current parade of shops, and Sine moved into one of these. After they left this shop they operated from Ecclesall Road as a trade electricians, and finally closed in 2005.
Def Leppard’s Joe Elliott also bought his first album here, Rod Stewart’s Every Picture Tells A Story, in 1971. “I bought it from a shop in Sheffield called Sine Electrical. The shop was in Broomhill which was where I lived and it cost me £2.11. I loved Rod Stewart back then.”

Slater. C.H.
78 Leppings Lane
Radio and television dealers who also sold a few records in plain sleeves with a rubber stamp overprint for a while. There is still a Slater’s Aerials in Sheffield so they might be linked.

This was another white goods store with records and gramophones etc. upstairs, with the stairwell decorated with LP and EP sleeve. No more information.

Smith. T.S.
65a Middlewood Road
Another busy shops, advertising themselves as “Newsagent, stationer, bookseller, gramophone record and toy dealer,” as well as offering films developed and printed, agent for rubber stamps, prompt delivery of newspapers and periodicals AND gramophone repairs! The shop is still a newsagents, right on the corner of Middlewood Road and Dyke’s Hall Road.

Smith’s (Decorators) Ltd
14, 16 Fitzalan Square.
A real oddity, a decorators selling records! I suspect it was a furniture shop in the main, and sold gramophone players and hence records as a sideline. Not sure which building it was.

Steward. Alan
The Melody Shops
15 Union Street, 14 Cumberland Street
Also listed at 10 Cumberland Street on another sleeve. Both streets are close to The Moor but have since been redeveloped (twice for much of their length!).
“Gramophone Records / Radio / Gramophone Players.”

E. Stringer
115 London Road, Sheffield
Stringer was a ‘wholesale and retail tobacconist’ but clearly sold 78s for a time as well. The premises is now an indian restaurant (“Lahore”) and the shop much altered but the overall building remains much as it was.

Sugg., H H B Ltd.
127 / 131 Pinstone Street
Suggs later became a well known sports retailer, but began life selling a wider range of goods and electrical items, and had branches around the county. This sleeve is from their Pinstone branch when they still sold records.

Swycher. F.
483 Abbeydale Road, Sheffield.
“Gramophones and Records, Cash or Terms”. The site of this shop is now a modern supermarket (it was originally a Victorian brick terrace, so quite modest). The sleeves I have (to be added) feature the locally made Gilbert and Geisha gramophones, which ceased manufacture around 1931, suggesting the shop was going in the Twenties. 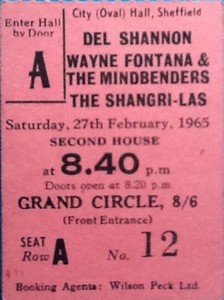