The Sheffield shop was secondary to Taylor’s original shop in Huddersfield. A 1929 British Industries Fair Advert lists them at The Shambles as manufacturers of Gramophones and Gramophone Tone-arms, Sound-boxes, Needle-cups, Record-cleaners, Internal Horns, etc. Registered Trade-marks “Novaphonic” and “Novavox”. This area was redeveloped in 1970, and The Moor had been totally flattened in the 1960s.

8 Middlewood Road
Specialists in Radio and television, Hoover, Meccano, Dinky Toys, Hornby Trains. Sounds like a great shop to have visited back in the 1950s! The building is still there, a strange low rise shop sandwiched between more imposing blocks, but has been much altered and is now an off-license.

Violet May Barkworth opened a second-hand shop on Duke Street after WW2, and eventually came to specialise in second hand albums and singles. Her last shop, at 12 Matilda Street just off The Moor in the city centre, was a mecca for collectors for over two decades. Such was the shop’s reputation and standing that a book about her life was published locally (with a forward by Richard Hawley). The shop – with records on two floors – is now a rather lacklustre branch of Forbidden Planet but remains much as it was structurally. I found the advert above in a copy of the local student magazine. Here is an article by John Firminger, who also supplied the image of the bag.

Whether you are or have been a serious record collector, you’re bound to know the name of Violet May. With her succession of shops she catered for the more discerning music fan in the 60’s and 70’s.

Violet started in business for herself selling second hand clothes and junk in premises in the Park district, at the time, one of the austere areas of the city. Her involvement with records began when, one day, a man  took a pile of old 78rpm records in to exchange for whatever cash Violet would offer.

She gave it a go and must have done OK as she began buying and selling more second-hand records. Still in the same part of town, over the next 15 years she moved around to four different locations, including a new shop on the Pavement shopping complex within the newly built Park Hill Flats. Here she operated under the snazzy name of  ‘Record Rendezvous’. Whether it was due to more expensive running costs, it seems like Violet only operated in these new premises for about 18 months before she re-located again to an older property on nearby South Street.

This shop had a room upstairs that was full of dusty 78’s and a record player enabling customers to listen to whatever took their fancy. I recall playing, and subsequently buying various items including ones by Hank Williams, Les Paul & Mary Ford and Tennessee Ernie Ford.

By 1965 Violet had moved again, still within the same area and was now on Broad Street, opposite a large car-park where the old Corn Exchange had been demolished and close to the wholesale market. This shop was dubbed ‘Collector’s Corner’ and became a regular stop-over for me and my mate Gus every Saturday afternoon, after of course a lunch-time session in the pub. Whilst there were other record shops in Sheffield, Violet had the distinction of being able to obtain some of the more obscure releases. These included pop, jazz, folk, blues, classical, country and rock’n’roll. Violet’s own taste in music was big band jazz but was open-minded enough to appreciate other people’s taste and of course, it made good business sense. I believe that Violet got a lot of her stock from a big warehouse in Manchester where her regular taxi driver would take her every month. 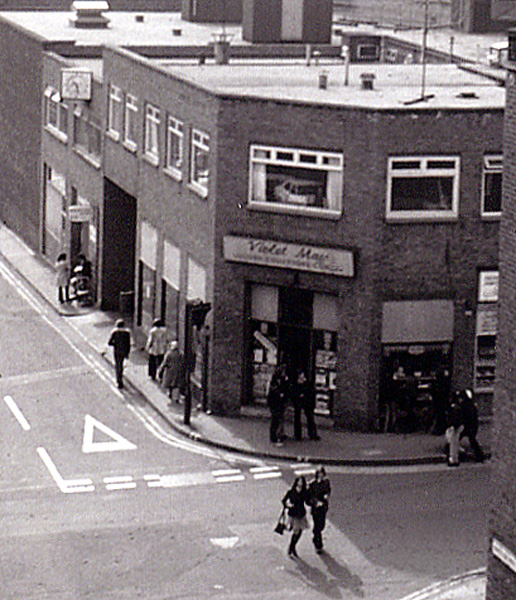 However whilst Violet knew what kind of music many of her regular customers preferred, sometimes she wasn’t altogether conversant with it. An example of this happened on one occasion when Joe Cocker asked to hear tracks from a Howlin’ Wolf album. As the music played Violet commented “she’s a good singer Howlin’ isn’t she”, thinking that the young black chick shown on the cover was the singer!!!

It was of course rock’n’roll and country music that were our preferences and through Violet’s shop. We managed to get hold of some real gems while others simply have sentimental value. Due to her acumen for being able to acquire some of the more obscure records her shop also attracted a number of notable customers  who would call in whenever they were in the area. These included folkies Billy Connolly and Stefan Crossman, jazz trombonist Chris Barber, legendary bluesman Jimmy Rushing  and Irish songstress Dana.

Violet’s shop had also become a veritable treasure chest. It would also be where some of the local performers like Dave Berry, Chris Spedding and Joe Cocker would look for some musical inspiration by way of obscure songs on record by American artists to add to their own repertoires.

In recognition of her shop at Broad Street, I recall one special Saturday when the then emerging blues  group Fleetwood Mac made a personal appearance to launch their new record. For Gus and myself, these long-haired southerners were of no musical significance to us as we requested Violet to turn up the volume on some rockabilly sides that she had just acquired for us. As the rockin’ sounds blasted out of the shop’s speakers, the band endeavoured to sign a few autographs and tried to talk to fans and probably wondered what was happening!

Other regulars to the shop was some of Sheffield’s black population, mainly from near-by Pitsmoor who Violet had begun catering for with a regular selection of ska and bluebeat records. This was also the case as soul music became popular with fans checking out some of the latest releases from Motown and Atlantic. 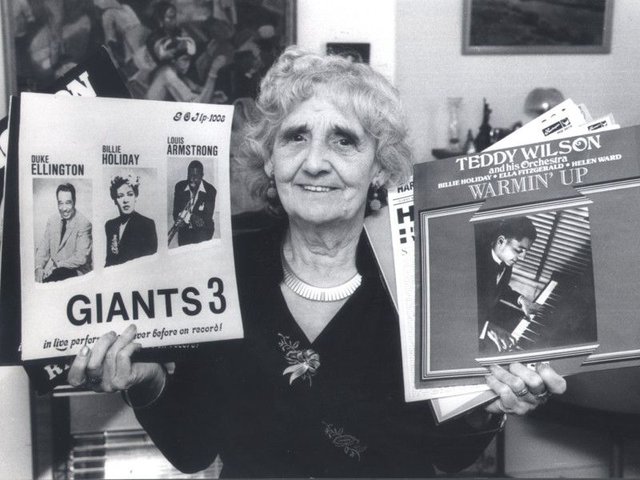 Remembering Violet herself, the wiry chain-smoking lady was a pretty formidable old bird who could be most friendly and obliging one day then quite hostile another, as the mood took her, in fact it was a wonder she had any customers at all sometimes! This would result in many of her regular customers approaching her with some trepidation. On the other hand, it could be just as un-nerving when Violet was really nice and friendly towards her punters.

Reflecting her mistrust in everybody (whoever they were) Violet insisted that if anybody was carrying a bag they must leave it behind the counter whilst browsing in the shop, implying they might be a bit ‘light fingered’. She’d often give out a warning by way of a veiled threat that she’d got the police coming!

Talking of her rudeness, she had one regular member of a staff, a small lady called Vera who often took the brunt of Violet’s moods and I remember feeling quite sorry for her as Violet would often give her a good telling off, for some paltry issue, in front of a shop full of customers.

My mate Gus also actually got a job working for her part-time doing any electrical repairs to some of the items that had been traded in, e.g. radios, electric lamps, record players, etc. Gus also had the job of trying to sort out the thousands of 78’s that Violet had accumulated over the years. Whilst being a record collector himself, this was a most daunting task as finding any record that appealed to us was like finding the proverbial needle in a haystack amongst the hundreds of classical, jazz and pop 78’s. However he managed to complete this somewhat mammoth task, putting all the various categories in order and thus, making it pretty easy for us to find the kind of 78’s we were after.

In 1970, due to the area being redeveloped to make way for Park Square, Violet’s shop moved again, this time up-town to Matilda Street, near the Moor in the heart of the city’s retail area. Here Violet’s shop was part of a new complex although she operated much the same as she had always done, merchandise-wise and  temperament-wise!

By this time Violet May’s had become the oldest and the best second hand record shop in Sheffield. If you wanted to browse through a particular label, EMI, Stateside, Capitol, etc., Violet would plonk old wooden soft drink boxes, full of singles and each with the label or category stencilled on the end whilst, still as distrusting as ever, she’d keep her beady eye on you as you flicked through.

In 1978, at the age of 68 and due to a decline in health (all those year chain-smoking) Violet sold her business to the son of one of her assistants and retired. The new owners found themselves with another mammoth task due to the chaotic state that Violet had left it in. They managed to get it back to some semblance of order amongst the thousands of dusty old records in stock and soon had the shop back up and running. The shop continued by trying to integrate some of shop’s tradition that Violet had set with the mainstream pop market. Unfortunately that area of town became more pedestrianised and for many less accessible, causing a gradual decline in customers and eventually closed at the end of 1985.

In November 1995 Violet May passed away with her place in Sheffield’s history acknowledged in the local press and affectionately dubbed the ‘Gramophone Granny’. Through her shops, Violet May had left a special place in the memories of many Sheffielders as well as other visitors to her shops.

In recognition of Violet May, in 2009 my pal Gaspin’ Gus Chapman and myself wrote a book about her exploits and also included various recollections of some of her old customers.  Titled ‘Shades Of Violet’ I’m pleased to say the book sold quite well locally and serves as a reminder of one of the city’s real characters as well as a major figure towards mine and many others’ record collections, despite her mood swings!

Acknowledgements to MY KIND OF TOWN Magazine Goodies

This was one of the second round of shops the chain opened, and brought a new record buying experience to the City. The original premises was in a then new-build concrete shopping parade right at the Southern end of the City centre. It was there for around 10 years before moving to a more central location with more space.

This High Street branch probably didn’t last very long, and when the chain opened or rebranded a number of shops as Megastores, Virgin moved again to a much larger shop with a big basement as part of a big redevelopment in the city centre.  This centre opened in 1987 and I think Virgin were one of the original tenants. There is a more detailed look at the Sheffield shop on the site.