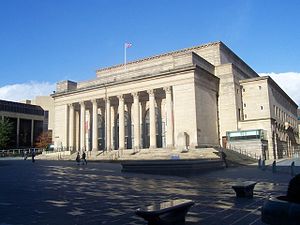 Sheffield City Hall is a Grade II listed building in Sheffield, England which dominates Barker’s Pool, one of Sheffield’s central squares. It was built and is owned by Sheffield City Council but is now managed by the Sheffield City Trust, under a 99-year lease and is operated by Sheffield International Venues as a venue for concerts and other events in its various rooms.

The building consists of three main performance areas: the Irwin Mitchell Oval Hall (capacity 2,271), the Ballroom (downstairs, 850) and the Memorial Hall (round the back, 500).

The building was designed in 1920 by E. Vincent Harris but construction was delayed 8 years because of the economic climate in the early 1920s. Eventually construction started with the laying of the foundation stone on 27 June 1929 and the City Hall was officially opened on 22 September 1932. It was originally proposed in 1916 as a Memorial Hall to commemorate the dead of the Great War but by the time of completion the name had changed to Sheffield City Hall, after some years of controversy.

During the Second World War a bomb exploded in Barker’s Pool, damaging the pillars of the building. The scars of the explosion can still be seen to this day. In 2005, the City Hall and its surroundings were refurbished and re-developed at a cost of £12.5 million. 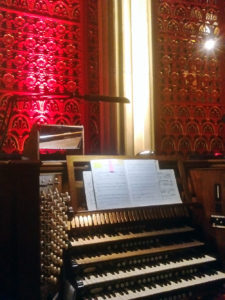 It is a neo-classical building with a giant portico. The Oval Hall is the largest hall in the building, seating 2,271 people. The Grand Willis III Organ is the largest in Sheffield with over 4,000 pipes and four manuals. The organ sits in a chamber situated behind the large decorative grilles facing the audience.

A pair of four foot high stone Art-deco lions, each weighing 2.5 tonnes, stood at either side of the stage when the main hall first opened in 1932. They were removed in 1962 as part of a refurbishment but returned to the foyer of the City Hall in October 2017, as part of the buildings 85th anniversary celebrations, after being owned by the Tarmac Group for many years.

Over the years, the venue has seen an extraordinary variety of acts, including pop, rock, jazz, folk, classical, comedy and many others.

Adapted from Wikipedia, the free encyclopedia