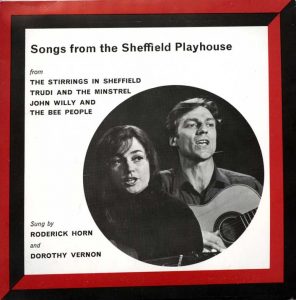 The Playhouse was a theatre that stood on the junction of Little Hill and Townhead Street until demolished in 1978. It was built as a Temperance Hall in 1855 and in the 1920s the Sheffield Repertory Company moved in. It didn’t look like a proper theatre until 1954 when a £30,000 restoration took place. It closed in 1971, a few weeks before the Crucible Theatre opened. It featured many performances and was home to Theatre Vanguard, a youth group that one of your SMA team attended!

This record was released in 1966 and featured songs from 3 shows held there, sung by Roderick Horn And Dorothy Vernon and written by Alan Cullen, Roderick Horn. Entitled “Songs From The Sheffield Playhouse” on the Unit Nineteen label (UN 19 1004ep). The tracks were: